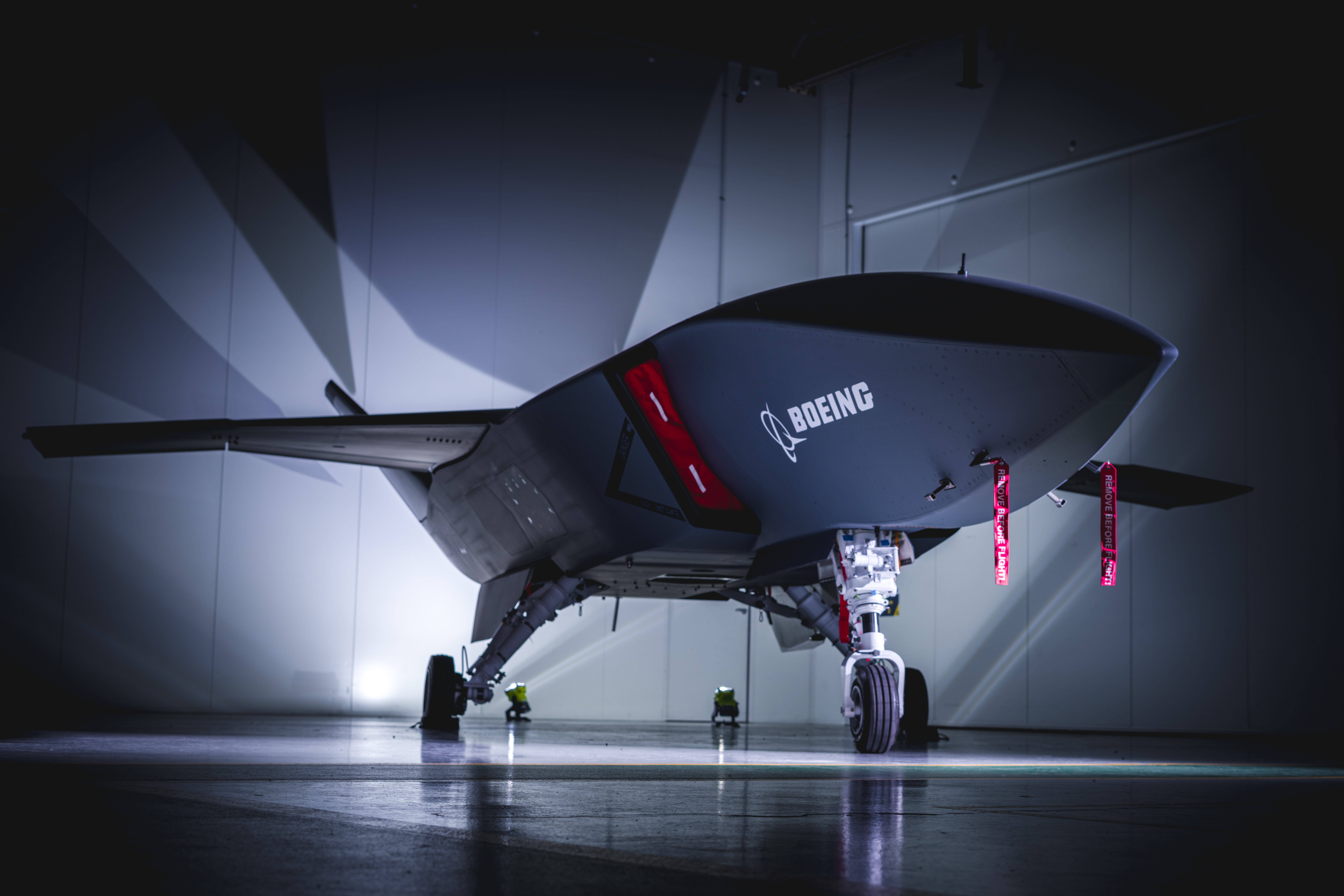 Boeing rolled out the first Airpower Teaming System unmanned aircraft for the Royal Australian Air Force on May 5, 2020. (Boeing Photo)

“Our team is excited and privileged to join the Boeing team and contribute to the design of Australia’s Loyal Wingman program,” said Brenton Lang, General Manager, Microelectronic Technologies. “This contract will help us support more than one hundred jobs across Southeast Queensland, from local suppliers, manufacturers and subcontractors.”

The project has demanded a strict schedule and precise requirements, but MeT has welcomed the challenge to help support the Australian aviation defence industry,” he said.”

MeT joins over 35 Australian companies in manufacturing the first military aircraft in Australia in more than 50 years. The aircraft rolled out today is the first of three prototypes for Australia’s Loyal Wingman program and serves as the foundation for the Boeing Airpower Teaming System product being developed for the global defence market.

MeT has been a supplier to Boeing since 2000. MeT is also a supplier to a range of other Boeing defence programs, including Currawong Battlespace Communications System and the Collins-Class Submarines.

“The Loyal Wingman is a historic development program for the Australian aerospace industry, Boeing and our entire industry team, and we’ve worked together with speed and agility to deliver this smart unmanned aircraft,” said Shane Arnott, Boeing Airpower Teaming System program director. “We’ve leveraged the skills of the local supply chain to build a Loyal Wingman that will work together with other airpower teaming assets to provide an unmatched capability for Australia and for our global customers.”

Microelectronic Technologies (MeT) specialises in custom high-end electronic design and manufacturing, which includes software and firmware design and automated test systems. Founded in 1992, MeT has extensive experience with electronic and product design, delivering projects that exceedingly meet the needs of defence, aerospace, mining and industrial sectors. Microelectronic Technologies is an Alliance Partner with National Instruments, a platform that enables rapid and effective development of customised test systems and System Integration. MeT has maintained a strong and agile team, dedicated to innovation and quality product design. Learn more at www.micr.com.au and follow us on LinkedIn.

Microelectronic Technologies Pty Ltd (MeT) is committed to protecting the privacy of all individuals. To deliver our commitment to privacy, we will comply with legislations and regulations of the countries in which we operate.

As an Australian registered company, MeT is bound by the Privacy Act as amended by the Privacy Amendment (Private Sector) Act 2000 (“Act”) and the National Privacy Principles contained within that Act. All employees and officers of MeT are expected to comply with the Act and this Privacy Statement.

Information or opinions which are collected, held, used or disclosed by MeT about an individual whose identity is apparent or can reasonably be ascertained, will be protected by the standards outlined in this Statement.

 What do we use personal information for? 
Any personal details that you provide will be used for the purpose of dealing with your request, enquiry or application for employment. This may involve disclosing your personal information to companies within MeT, or to service providers who assist us in operating our business.These organisations are required to comply with the principles of this Statement. With regard to all other enquiries, your details will only be accessible and used by personnel dealing directly with your request. We do not use, or disclose, any personal details that you provide to us for the purposes of direct marketing, unless allowed and acknowledged by that individual.

 Disclosing Personal Information 
As noted above, we may share personal information with related companies or with contractors performing services for MeT, which are required to comply with this Statement. MeT will only make such disclosures to achieve the purpose for which the information was provided. Otherwise, MeT’s policy is not to disclose any personal information to any unrelated third party, except with your consent, or where we are required by law to do so.

 Retention and Disposal of Information 
MeT will only keep personal information that it needs for the purpose for which it was collected. MeT will dispose of such information when it has no further need to use it, or it is required by law to do so.

 Microelectronic Technologies Web Site 
This Statement applies to all of our web pages at www.micr.com.au. It explains our practices with respect to collection and processing of any personal information that may be collected as a result of your use of this site (i.e. information from which an individual’s identity is apparent or can be reasonably ascertained).

 E-mail Security 
In line with our policy on e-mail security, any e-mails that you send will be automatically scanned, which could result in certain attachments and styles of message being automatically blocked. Our IT Administrators may have access to your e-mails in order to authorise the content. This is done purely for IT security purposes and our IT Administrators will not access the contents of your e-mails once this process is complete.

 Accessing and Updating Personal Information 
Please let us know if your details change and we will make every effort to keep any personal information held up to date and accurate. You can access your personal information and notify us of any change, modification or correction, by contacting Microelectronic Technologies at Brisbane Technology Park.

The information contained in this website is for general information purposes only. The information is provided by Microelectronic Technologies and while we endeavour to keep the information up to date and correct, we make no representations or warranties of any kind, express or implied, about the completeness, accuracy, reliability, suitability or availability with respect to the website or the information, products, services, or related graphics contained on the website for any purpose. Any reliance you place on such information is therefore strictly at your own risk.

Through this website you are able to link to other websites, which are not under the control of Microelectronic Technologies. We have no control over the nature, content and availability of those sites. The inclusion of any links does not necessarily imply a recommendation or endorse the views expressed within them.

Every effort is made to keep the website up and running smoothly. However, Microelectronic Technologies takes no responsibility for, and will not be liable for, the website being temporarily unavailable due to technical issues beyond our control.